I've been silent for the last month or so but I have been working hard. I have a very rough draft of my next book - Tribe of Eve - finished.

I'm very excited about this book because the heroine, Thea, really grows in the books. There are also a lot of interesting plot twists that I've been waiting to get into.

I love this phase of a book - the excitement of putting the ideas down on paper without worrying about the "mechanics" of it all.

Check out the cover. Love it!

Thank you too all the readers over at All Romance eBooks where The Prelude made it to the Bestseller list in Scottish/Highlander books.

Next: The Interlude in for editing - hoorah!

I've submitted the next Nakhla book for copy editing! Yeah. I'm actual ahead of schedule, which for me is something, let me tell you.

I've also got a very rough first draft of the next,next one, Tribe of Eve. I'm having so much fun writing these books, I love not having to worry about a Happy Ever After. Don't get me wrong, I like a good love story as much as the next girl, but things are going to get pretty rough for Thea over the next few months, as this story twist and turns.

I like to read Urban Fantasy that has an edge to it, and I hope that I'm able to create that in my own books. The first two are more fluffy, still Urban Fantasy, but not as gritty as I'd intended, but things will be changing pretty quick in Tribe of Eve.

I hope that readers will come along for the ride, and are enjoying meeting these characters as much as I'm enjoying coming up with them. But then I have a pretty strange mind...

In this third story - (currently titled The Interlude), we meet some other important characters, Magdalena delRosa and Yuri Razin. Yuri is Dmitri Razin's (Secret Muse) older brother and he's starting to wonder WTF has happened to Dmitri.
Posted by Ceci Dahl at 6:40 PM No comments:

Email ThisBlogThis!Share to TwitterShare to FacebookShare to Pinterest
Labels: Odyssey of Nakhla, writing 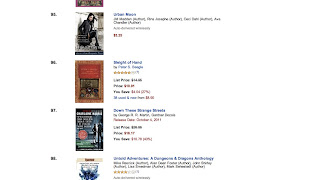 I'm doing my first blog interview today over at The Inkwell to promote the release of The Prelude.

Hop over and read my first poor attempt at an Interview! Also, if you leave a comment with your email on the blog you can win a copy of The Prelude. I'll draw a lucky winner on April 16th.

Thanks to the crew at Savvy Authors for setting up my Blog Tour!
Posted by Ceci Dahl at 6:23 AM 1 comment:

Fun is over! Back to work on book 2: The Interlude.

Thank you to everyone that has bought The Prelude! I'm so glad I wasn't the only one at the party! But the fun is over and it's time to get back to work.

I'm on a mid April deadline to get the next part of this story out. Magdalena del Rosa has found something VERY important going on with the Eye of Nakhla. Yuri Razin (remember him...Lucy's Russian henchman?) is in place to snatch up the goodies. But I have confidence that Magdalena's going to soften his tough heart and save him from himself.

Or at least she will if I get the damn thing written. So, back to work. Parties over, brief moment of success done - back to the angst!